So we’re back to checking the sampling treats offered up by the music gods from back in the day. We got some Rock and Soul this time around starting off with this little ditty here. Daryl Hall and John Oates had a string of hits in the late seventies and early eighties before fading into obscurity in the nineties. They dropped this tune in 1981 and it has been sampled extensively since by people like 2 Live Crew, King Geedorah, Heavy D and in this example De La Soul. On a side note apparantly MJ once admitted to Daryl Hall that Billie Jean copied elements of this tune, Karma’s a bitch huh!

This tune here was where the horns in Say No Go are lifted from. It was on Sly Stone’s first solo excursion ‘High On You’ which was released on Epic Records in 1975. I have to say I don’t know much about Sly Stone, but he looks cool as fuck: 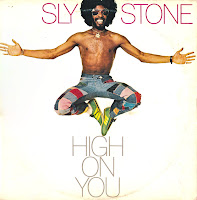 De La Soul need no introduction I’m sure.This was on the seminal LP 3 Feet High and Rising which dropped in 1989. Production credits go to Prince Paul (of Stetsasonic and Gravediggaz fame) who produced all the tunes on that LP i think. The ‘ooooh’ sound at 0.06 seconds in is lifted from the The Emotions – Best Of My Love see if you can identify it in there… Anyway wicked times, wicked tunes, get in.