So this Sunday 31st August was the final 36th Chamber night in the Tap & Spile. We’ve been doing these nights for over 7 years now and it was a sad day when we found out a couple of weeks ago that the landlord who had worked with us for so long was leaving the pub. We decided to go out with a bang though and booked DJ Friction, DJ Randall and MC Foxy to play us out in style.

The night went off heavy like it was destined too and all the 36th Chamber DJ’s pulled out the stops to mash up the dance one last time. Friction killed it with his ridiculously slick mixing and heavy drops before Randall and Foxy dropped some serious tunes to test the sound system. Massive shout out to those guys (and Scheme from Bounce Recordings) for coming down to the party!

We ended with a back to back session from Vapour & myself and although we were both half cut on champagne and weed, we rocked it with a few of the classic tunes that got the Tap jumping over the years, which personally i fucking loved. I hope the people of Newbury (and beyond) have learned something in our time doing the sunday night sessions as well as having a good time to some decent tunes once a week. It’s a real shame that its all over now, but we have plans for the next one which will be kicking off a bit later in the year. You will be firmly spammed when the details are confirmed!

Massive thanks to all who have helped us out over the last 7 years; all the people who have given us lifts with the speakers and decks, all the people who’ve come down and chatted on the mic, all the guys (an a couple of girls) who’ve sacrificed their sunday evening roast to turn up and spin some records, and most of all the party people who came down week in week out and made the vibe what it was. There’s far too many people to list individually but we both know who you are, so big up ya chest!

This is the only picture i got so far. If you got any hit me up and i’ll stick them online! 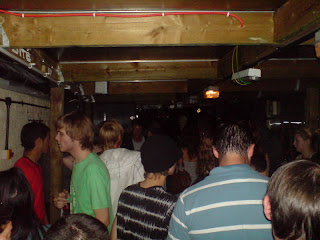