Anyone else see this on Channel 4 last night?

I think it’s really important we pick the right Government this time around as Labour seem to have decided to sell us down the river in the run up to their inevitable election defeat. After watching these three politicians for an hour on telly last night, I’m convinced Cable and the Lib Dems are the only way to go. Osborne was a too awkward, and lacked the balanced and considered views of Cable, instead trotting out party lines and insisting that Cameron agreed with his policies, all the while Darling kept calling him irresponsible.
Darling, as was pointed out by both Cable and Osbourne had his chance to make a difference during the last 13 years of Labour rule that ended in this mess, so he’s out straight away. And between Osborne and Cable there was no competition, One seemed to be level headed, rational and firmly in control of the subject and the other one was George Osborne. 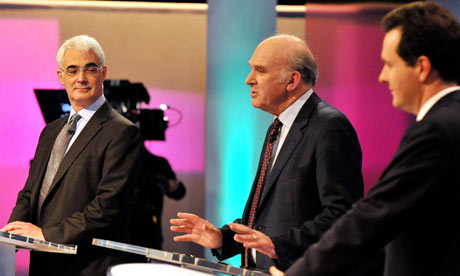 The Labour government led us into this mess. They have done severe damage to pensions and savings, they have wasted a vast amount of money on over-centralised public services.

The Tories presided over two big recessions in office, they wasted most of the North Sea oil revenue, they sold off the family silver on the cheap. Now they want to have another turn to get their noses in the trough and reward their rich backers.

The Liberal Democrats are different. We got this crisis basically right. We are not beholden to either the super rich or militant unions.

Think that says it all really.